ZMD: Zombies of Mass Destruction was entertaining and interesting, but it wasn’t brilliant by any stretch of the imagination. If you’re into Romero’s films, I think you’ll enjoy this one and if you do watch it, let me know what you think! 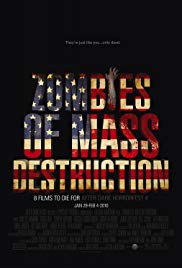 Life is wonderful for the people in the quiet, island town of Port Gamble….until a zombie virus outbreak!

Interesting Facts: The marching band at the end of the film is that of the local North Kitsap High School Vikings in Poulsbo, Washington. The fight song heard is in fact their fight song; during the opening credits, when we see a few characters passing houses, a car with the camera crew can be seen in the windows; and having Port Gamble as an island suits the plot, but Port Gamble, Washington is not an island but is actually a town on the Kitsap Peninsula.