I caught this (short lived) series on Netflix the first week it was available and I loved it! Such an interesting take on the ZA and contained enough unique facets to keep it interesting. Such a shame Netflix decided not to greenlight Season 2 but if more people watch it, maybe they’ll change their minds?? We can hope can’t we? 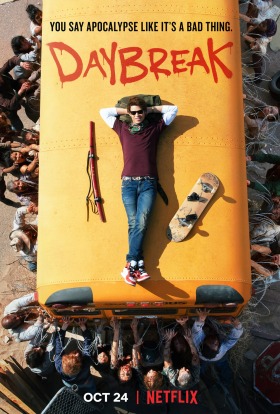 Interesting Facts: Filmed in part at Cottonwood Mall, Albuquerque, New Mexico; There are a few nods to ‘Ferris Bueller’s Day Off’ other than the lead actor himself, Matthew Broderick (one being an altering of the famous line, “Life moves pretty fast. If you don’t stop and look around once in a while, you could miss it.” Josh Wheeler, states “Things are mutating fast around here. If you stop and look around, you may get eaten.” Others include the teacher droning “Wheeler” at the beginning of episode 1, Josh driving a red Ferrari, and Josh’s character frequently breaking the 4th wall to address the viewers); and Alyvia Alyn Lind’s character Angelica takes over the Josh Wheelers wall breaking in episode 3 (while giving the speech she tosses out a few movies her story is like. These movies include A Clockwork Orange, Apocalypse Now, & Goodfellas. She next goes on to quote Ray Liotta’s character in Goodfellas, by saying, “As far back as I can remember, I’ve always wanted to be a gangster.”).