Another classic coming at you with War of the Zombies! It’s a great film and one worth a watch if you’re a zombiphile like myself. Let me know what you think if you’ve seen it! 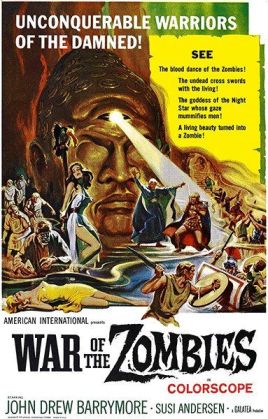 A fantastic yarn about a plot to conquer the world with an army of zombies!

Interesting Facts: This film was picked up in the United States by American International and released at the bottom of a pre-packaged double feature with another foreign negative pickup, Senkichi Taniguchi’s “Samurai Pirate” which was re-titled “The Lost World of Sinbad.” This film was re-titled “War of the Zombies” for its theatrical release and as “Night Star: Goddess of Electra” for the television syndication prints; and it’s tagline was “Unconquerable Warriors of the Dead!”.