Today I have the pleasure of featuring an interview with author Angela Scott! But before we begin, let’s take a moment to get to know her better… 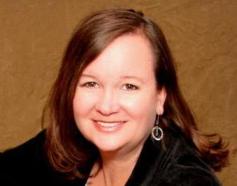 Angela Scott hears voices. Tiny fictional people sit on her shoulders and whisper their stories in her ear. Instead of medicating herself, she decided to pick up a pen, write down everything those voices tell me, and turn it into a book. She’s not crazy. She’s an author. For the most part, she writes contemporary Young Adult novels. However, through a writing exercise that spiraled out of control, she found herself writing about zombies terrorizing the Wild Wild West–and loving it. Her zombies don’t sparkle, and they definitely don’t cuddle. At least, she wouldn’t suggest it. She lives on the benches of the beautiful Wasatch Mountains with two lovely children, one teenager, and a very patient husband. She graduated from Utah State University with a B.A. degree in English, not because of her love for the written word, but because it was the only major that didn’t require math. She can’t spell, and grammar is her arch nemesis. But they gave her the degree, and there are no take backs.

Welcome Angela, now let’s get to the questions. Tell us about your zombies? If the dead were to rise, do you think you’d stand a chance against them?

I like my zombies slow, gross, and hungry for flesh. Nothing moved fast back in the Wild West, so my zombies take on that same approach—slow, but deadly, even more so in large numbers. Decaying cowboys with an insatiable hunger. As for surviving a zombie outbreak, OH NO! I’m totally screwed. I can’t fight. I own one gun that has a lock on it (no idea how to get it off) and only two bullets which can’t be located. I cry when I get scared so yeah, I will maybe last 10 minutes at the most during an outbreak, but on the positive side, I will make one fine zombie. I actually wrote a blog about the four kinds of survivors and you can read more about which kind of zombie apocalypse survivor I am here.

At least you’re honest about it! What was your first experience with zombie media? Was that experience was drew into writing the genre?

I think my first experience had to be in watching Shawn on The Dead. That was one of the first movies I ever watched that included zombies. I loved it, but no, it wasn’t any of the movies that brought me to the decision to write about zombies. It actually started out as a writing exercise in my critique group. It was suggested that we needed to try and write something outside of our comfort zone (for me, my comfort zone was writing contemporary fiction). I was given the assignment to write a zombie western. At first, I wasn’t sure what to do, but the more I wrote, the more I fell in love with the whole thing. My critique buddies encouraged me to keep writing and to turn the concept into a trilogy (which I did). It was actually writing WANTED: Dead or Undead that landed me a publishing deal with Evolved Publishing. I don’t know that I set out to be known as a zombie writer, but I do know that I like it. I like it a lot.

That’s still awesome! Pop Quiz time… The item to your left is your only weapon during the Zombie Apocalypse. What is it and what do you think are your chances at survival?

A guitar. Not bad. It could be far worse, but if that was my only weapon, then I’m in trouble. If it was an electric guitar or metal or something hardier than hallowed wood, then maybe I could live a bit longer. But woe is me, it’s an acoustic guitar. I will probably only be able to get in one good whack before it breaks.

Tell us your five favourite pieces of Zombie media…

1)      Right now, my husband and I have been playing THE LAST OF US, and it’s awesome. I’m really enjoying it. (He plays, I watch. I suck at gaming. I can’t work the stupid controllers and it get anxious just watching—can you imagine me in real life scenarios then? Yeah, I’m toast).

4)      I love playing ZOMBIE FLUX (a card game) with family and friends. Everyone loves it. Easy to play.

5)      World War Z – the movie, even though it didn’t stick to the book at all. I sat on the edge of my seat the entire time. I went with a friend you saw me cowering in my chair, peeking between my fingers, and said, “But you write about zombies.” I told her to shut-up 🙂

There’s nothing wrong with peeking through your fingers! We all know that we sometimes have bad luck. Keeping that in mind, what song do you think would get stuck in your head, playing over and over again on an incessant loop?

Right now, it’s Lorde’s ROYALS. My daughter plays that ALL THE TIME. I no longer enjoy that song at all. Must. Change. Station.

Oh, that might be a hard one to have stuck in an infernal loop…

And now let’s take a look at Angela’s book Zombie West… And don’t forget the clicking on the cover will take you to Amazon! 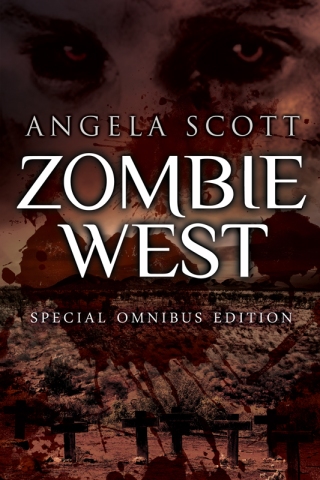 The Wild West is hard enough to survive with its native territory, wanted
outlaws, and harsh terrain, but with a plague turning civilized people into
brain-eating monsters, survival becomes nearly impossible.

Red has lost everything to the fast-spreading disease: her family, her trust in
mankind, and her hope for a better tomorrow. When she meets Trace, a
smooth-talking gambling man who’s more city boy than cowboy, she’s forced down a path she’d been avoiding for years. Until his arrival, she’d lived by a certain set of rules–don’t ask names, keep to yourself, don’t let anyone too
close–but the jackass of a man won’t let her be, and he has an uncanny knack
for appearing at all the wrong times and in all the wrong places.

Each with a secret of their own, will need to learn that only by working together do they have any chance of surviving The Zombie West.

That is if they don’t kill each other first.

FEATURES ALL 3 BOOKS IN 1 SPECIAL EDITION:
Book 1 – Wanted: Dead or Undead
Book 2 – Survivor Roundup
Book 3 – Dead Plains
This special edition also includes 2 exclusive short stories, along with additional bonus content available only in this omnibus edition — and all for much less than the 3 books purchased individually.

One thought on “5 Questions with Angela Scott”