Last Friday, I presented 28 Days Later… and as I think its sequel is the better film in the series (the third of which is apparently in the works as well), this Friday we’re going to explore 28 Weeks Later; who can go wrong with Robert Carlyle? 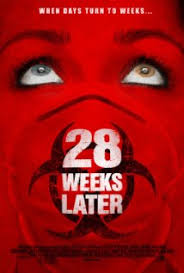 28 Weeks Later picks up six months after the Rage Virus has decimated the city of London. The US Army has restored order and is repopulating the quarantined city, when a carrier of the Rage Virus enters London and unknowingly re-ignites the spread of the deadly infection and the nightmare begins… again.

Interesting Facts: Robert Carlyle had turned down the Christopher Eccleston part in 28 Days Later…, when Danny Boyle, Alex Garland and Andrew Macdonald first began to consider a sequel to 28 Days Later…, their initial idea was to do 29 Days Later, possibly using the characters of Jim, Selena, and Hannah from the first film. This idea was dropped in favor of doing a film set within the time-frame of 28 Days Later…, focusing on an SAS team sent into London to retrieve either the Prime Minister or the Queen. Finally, it was suggested to set the film some time after the events of the initial film, and to deal with the impact Rage has had on society in general, and the farm that Don and Alice hide out in the start of the film is the same farm that appears in Children of Men.

And now its time for the trailer!