If you’ve never seen Night of the Comet, it’s about time you dug out an old copy somewhere and gave it a shot! It’s a great zomcom from the 80s chock full of great retro references! 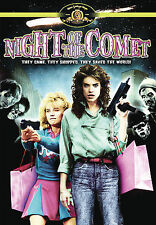 It’s the first comet to buzz our planet Earth in 65 million years, and everyone seems to be celebrating its imminent arrival. Everyone except Regina Belmont, and her younger sister Samantha, two Valley Girls who care more about fashion trends than celestial phenomena. But upon daybreak, when the girls discover that they are the only residents of Los Angeles whom the comet hasn’t vaporized or turned into a zombie, they would do what all Valley Girls do – they go shopping. However, with the help of a friendly truck driver, the girls save Earth and escape from flesh-eating zombies and blood-seeking scientists in hot pursuit.

Interesting Facts: The scenes of an empty Los Angeles were filmed in the morning on normal business days and the shots of the barren city were done quickly while the traffic was held up at stop lights; The LP that Sam tosses over her shoulder is the soundtrack to “Valley Girl”, which would become, for a short time, one of the most sought-after albums of all time; while writing the screenplay, Thom Eberhardt asked teenagers for their input on what they would do if they survived the end of the world; and Joss Whedon has cited this film as a “big influence” for his original film script of Buffy the Vampire Slayer (1992), which is rebooted in his television series Buffy the Vampire Slayer (1997).