Let Sleeping Corpses Lie is an interesting little film from the 70s that definitely clicks many of the required boxes for a great zombie film. While it may seem a little cheezy at times, it really does hit home and gives a good overview of the political climate of the era. Give it a watch and let me know what you think! 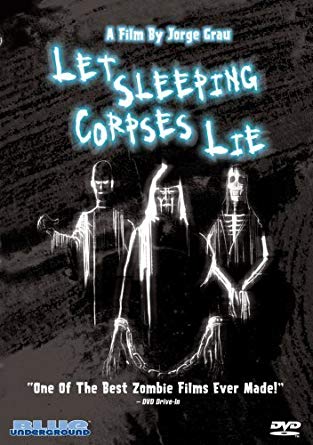 A couple (Ray Lovelock and Cristina Galbo) travelling along the English countryside stop to get directions from a pair of Ministry of Agriculture workers who are testing an experimental device designed to drive crop-damaging insects into killing each other. While they plan their next stop, a man who has been dead for several days attacks–to be followed shortly thereafter by a full-scale zombie invasion–which could very well be a result of the agriculturist’s distribution of ultrasonic radiation. A macabre, atmospheric Spanish-Italian co-production featuring extremely convincing performances and a haunting score by Giuliano Sorgini. The second half of the film contains enough gut-munching gore scenes to satisfy most horror fans, leading to an unexpected and eerie finale.

Interesting Facts: Director Jorge Grau purposely cast an actress known for having a flat chest in the role of the nurse so that a fake chest piece could be applied that the zombies could tear into for her death scene; the film’s bizarre alternative title, “Don’t Open the Window”, inspired Edgar Wright to make his mock-trailer, “Don’t”, for the film Grindhouse (2007); and the film’s strange music score is partially made of moaning and breathing noises. It was director Jorge Grau who made these eerie sounds, as well as those for the zombies.