What would happen if the zombie apocalypse started at a convention? Convention of the Dead explores that with a little comedy and a lot of zombies! It’s a hard movie to find and while it’s not been ‘finalized’ per se, there are copies floating around 😉 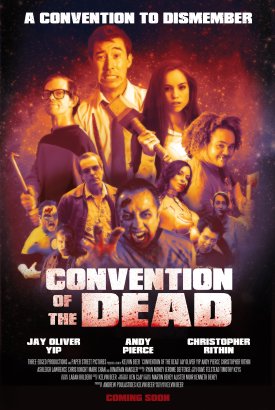 A small group of sci-fi fans on their annual trip to their local sci-fi convention – only something’s a little different at the convention this year, the zombie apocalypse.

Interesting Facts: The production was plagued with technical problems through out the shoot making the shooting days extremely long. The director Kelvin Beer and producer Andrew Poulastides were sleeping on average of only two hours a night through out the 28 day production; the film is entirely self financed; and the cast and crew all lived and shot in the four star hotel for the duration of the shoot over the course of the the 28 day shoot.