I love watching reality shows and Big Brother is a fave so to combine my love of trashy TV with zombies—perfection! Check out the miniseries if you haven’t yet; it’s an enjoyable ride for sure! 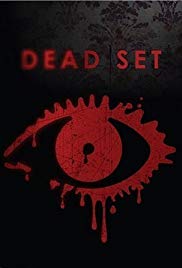 It’s eviction night at the Big Brother house, but something very strange is happening; the dead are coming alive and attacking the living. When zombies attack all of the audience outside, the Big Brother contestants are unaware of the death outside the fan-proof (and zombie-proof) big brother house until the show’s runner, Kelly, comes into the house and warns them of the doom outside. Stuck with even less contact with the outside world, the house-mates must sneak out of the house to get supplies, without being seen by the zombies.

Interesting Facts: Charlie Brooker makes a cameo as a zombie; Alex and Riq run towards a house to escape a pack of zombies. The actress that plays Alex was also in the zombie movie Resident Evil (2002), in the game of which that movie is based on the survivors have no option but to run for the house they find in the woods as well; and Davina McCall reputedly required less time in make up for her performance as a zombie than she would normally require for the standard Big Brother show.