I watched Dead Before Dawn on Hallowe’en and I’ve got to admit that it was super funny! If you like a good zombie comedy with a twist, check this one out for sure! 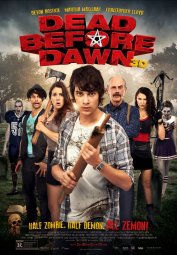 A group of college kids accidentally create, and then unleash, a curse that makes anyone they come into contact with kill themselves and then turn into zombie demons.

Interesting Facts: Dead Before Dawn is the first ever live action, 100% Canadian feature film to be shot in Stereoscopic 3D; our young heroes attend college, yet the cheerleaders are wearing uniforms with embroidered initials that end with “HS”; and at about ten minutes from the end, the van is shown with a broad, even band of smeared blood across the front—immediately afterward we see an earlier version with significantly less blood.