It’s been seven months since it all happened. We woke up one morning to the end of the world.

It’s been seven days since you left. You went out looking for supplies to help fortify the small hole in the wall we’d managed to find. Maybe even find some food to keep our spirits up and our bodies going. Seven long days without word, without anyone else to talk to. Long days of utter, deafening isolation. 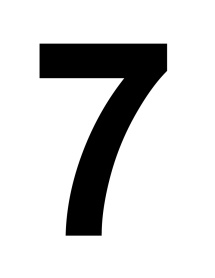 It’s been seven hours since I awoke to the sounds outside. I wondered if it was you but knew in my heart it wasn’t. They’d found us and now it was only a matter of time before they got in. I cursed myself for not being strong enough to go with you, but my swollen belly made travel too hard with what the world had become.

It’s been seven minutes since someone broke through the paltry excuse for a reinforced door. I say someone, but it was one of them. I could hear the snarling coming from the dark hallway that lead in the room we were using as a home. I prayed it was a dog or something small I knew I could fend off, but my prayers went unanswered.

And in seven seconds, I’ll join them…