Haven’t seen Night of the Creeps?? Seriously?? You are missing out on a great 1980s zombie comedy! 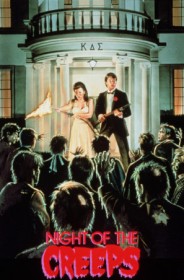 In 1959, an alien experiment crashes to earth and infects a fraternity member. They freeze the body, but in the modern day, two geeks pledging a fraternity accidentally thaw the corpse, which proceeds to infect the campus with parasites that transform their hosts into killer zombies.

Interesting Facts: The movie the house mother is watching on TV is Plan 9 from Outer Space (1959), a fair share of the film was shot in an old Woolworth’s department store that was converted into a makeshift studio; Greg Nicotero and Howard Berger play Zombie extras; and the “Corman Clarion” newspaper, along with the university name, is a reference to Roger Corman.

2 thoughts on “ZOMBIE FILM FRIDAY: Night of the Creeps | #ZomCom”