Resident Evil: Extinction may be my least favourite of the franchise but it’s still a very good film in its own right. The desert setting makes for a number of interesting situations and the tide of the apocalypse sweeping across the landscape and what it left behind is breathtaking and utterly terrifying. 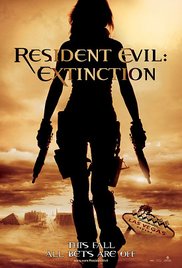 Years after the Raccoon City disaster, Alice is on her own; aware that she has become a liability and could endanger those around her, she is struggling to survive and bring down the Umbrella Corporation led by the sinister Albert Wesker and head researcher Dr. Isaacs. Meanwhile, traveling through the Nevada Desert and the ruins of Las Vegas, Carlos Olivera, L.J., and new survivors K-Mart, Claire Redfield, and Nurse Betty must fight to survive extinction against hordes of zombies, killer crows and the most terrifying creatures created as a result of the deadly T-Virus that has killed millions.

Interesting Facts: There were unused scenes from the original script where Alice manages to hack into the files of Umbrella, revealing her real name is not Alice Abernathy but Janice Prospero; a conscious decision was made early on to make this the bloodiest of the Resident Evil films; and Ali Larter was cast largely on the strength of her performance in the first two Final Destination movies.