How have you enjoyed the series?? For the last question, I wanted to test the authors – really make them ponder their answer… So I asked them:

If faced with leaving a loved one behind in the interest of surviving the oncoming hordes, what would you choose to do?

As you read their answers, remember to ask yourself whether or not you think they’re being honest… Would they really sacrifice their own survival in an unguaranteed attempt to save their loved ones??

Not even a thought. I’d push them down or use their body as a shield… um, I mean, I’d totally sacrifice myself for them. Wait… which of my kids would it be?

Julianne Snow, author of Glimpses of the Undead –

Go out fighting. There’s no point in surviving when you can’t live with yourself.

I would stand and fight. You never know your chances. You may actually prevail.

Oh, my wife and I have had this discussion.  If stuff gets real, we’ve both agreed we’re not, like, coming for one another like Rick Grimes.  And no, “Oh, Johnny, it’s Johnny, my brother!” stuff either.  Zombification = deadification.

Sarah Lyons Fleming, author of Until the End of the World –

That depends on who it was. If it were one of my kids, not zombified, I’d be fighting to my dying breath. If I had my kids, then so long, sucker!

If they were injured, infected or dying, I’d either leave them with a weapon to finish the job or kill them myself before I took off.  Anybody that loves me wouldn’t expect me to die for them.

TS Alan, author of The Romero Strain: A Zombie Novel –

Leave but make sure the person I had to leave behind is left with provisions and weapons.

I’d live, only because it’s what I’d want them to do.

Ian McClellan, author of One Undead Step: A Zombie Novel–

That’s tough. I don’t have a lot of loved ones, so it would be hard to leave one behind. If it was certain death, and there was no way I could save them, I think I would make the reasonable choice. There’s no point in dying just to die.

It depends on which one it was.  Just kidding.  I’d do my best to protect them, even if it meant going down myself.

Oh, would you look at the time? Gotta run…

Robert Chazz Chute, author of The Plague of Days Season One –

I’m the least important person in my home. I stay and make my stand. The kids and She Who Must Be Obeyed get to go to Baskin Robbins.

Rhonda Parrish, author of Waste Not–

Depends on the loved one. That’s the wrong answer isn’t it? LOL But some people are more ‘loved’ than others. If we’re talking my immediate family, well I guess we’re all dying together, but if it’s like my great aunt Bertha twice removed… well, I’ll probably feel bad for leaving her but I’ll be alive to do it.

I wouldn’t leave someone behind if there was any choice to it. Being forced to, I guess I would. But I would try like hell until I was absolutely sure there was no other option.

Now, if it were someone I didn’t love… he he he

What? like a sick aunt that couldn’t run or because my husband was bitten or something? That’s a hard question. I guess each circumstance is different. I couldn’t ever leave any of my kids behind, and I wouldn’t fair to well without my husband, so ‘surviving an oncoming horde’ wouldn’t really be an issue since I highly doubt I’d survive without him. I have no sense of direction, so it’s more than likely if I did run, I’d end up back in the same spot twenty minutes later anyway.

It all depends upon the circumstances and the loved one. If it were my wife, I’d have a hell of a time leaving her behind. If I absolutely had to, I’d make sure she was prepared for anything and everything. This would also depend upon my chances of helping mankind to overcome the onslaught. What good is my survival without those I love – unless it is for a greater good. Even then…that’s a tough one.

I’ll keep flip flopping on that one until I’m actually faced with the decision. 😉

Jay Wilburn, author of Zombies Believe In You –

I would put them away quietly and tell everyone else they went to live on a farm where there was lots of room to run around, but we don’t have time to visit. 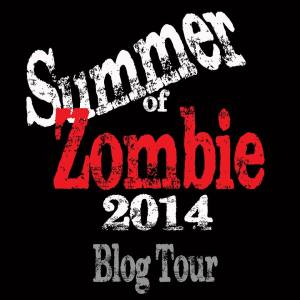 The stench of rotting flesh is in the air! Welcome to the Summer of Zombie Blog Tour 2014, with 33 of the best zombie authors spreading the disease in the month of June.

Stop by the event page on Facebook so you don’t miss an interview, guest post or teaser…and pick up some great swag as well! Giveaways galore from most of the authors as well as interaction with them! #SummerZombie

AND so you don’t miss any of the posts in June, here’s the complete list, updated daily: