As darkness fell, Carmen’s worry increased. Doug was outside, alone, and no one seemed to understand how dangerous the situation was. At least there was nothing to prevent her from thinking that way.

Sister Mary Francis poked her head in often, trying to make sure Carmen was okay. The constant scrutiny only made her angrier and soon she was actively attacking the nun with words each time her pleasant face appeared. But that didn’t deter the sister—in fact she understood Carmen was just as close to acceptance as she was to losing it completely.

“What the fuck do you think?” Carmen responded.

To her credit, the nun didn’t react to the curse, instead choosing to offer a sympathetic smile, “I know this is a difficult time for you. Try to hang in there and be positive.

Carmen grimaced at the women, knowing there wasn’t much else she could do. That didn’t make it any easier—Carmen was crawling the walls with worry and inactivity. “Platitudes aren’t going to solve the issue Sister. We need to get out there and find Doug ASAP.”

“We’ll go out as soon as it’s light again. Even you must be able to hear the cries of the undead, God rest their souls, from here…” As soon as the words were out, Sister Mary Francis regretted them.

“Of course I can hear them! Did you think mentioning it was going to make me feel better?” Carmen spat, her anger beginning to rise again.

“I’m sorry dear.” It was all the nun said before disappearing again.

Doug ran through the streets, his panic taking over in his haste to escape. He had no idea where he was going and had somehow managed to turn himself around in the crisscrossing network of streets.

Echoing in the background, the constant shrieks of the monsters kept him moving. Every turn was calculated to lead him away from them, but each time he turned, Doug ran the risk of walking right into another roving horde.

Rounding yet another corner, Doug finally spied an area he recognized. He was only two short blocks from the church and the warm, comforting arms of his wife. Doug dashed forward, trying to close the distance between himself and the fortified building that beckoned to him with sanctuary.

An angry shriek burst from the cross street, startling him into stopping for a moment. He watched as a creature approached him, noting the yellowed skin and milky white eyes. Doug shuddered in fear before sprinting in the direction of the church’s entrance, noting the growing horde of monsters amassing in the street just beyond the one who’d first spotted him.

His mind spun with expletives as he cursed his bad luck so close to home. He charged into the yard, clamouring up the steps as quickly as he could. Knocking frantically on the double doors, he screamed for anyone to let him in. 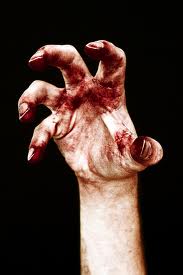