Doug got to the door in record time, quietly moving the chair back its rightful place before sitting it and saying, “Come in.”

As the door swung open, Carmen was just entering the living room, rubbing the sleep from her eyes. Taking a seat alongside Doug, they watched as three men entered the room.

The pair nodded, waiting to be introduced to the mysterious duo with him.

“I’d like to introduce you to Murphy,” his arm extended to the man on his right, “And Colin. They run this place and have a few questions for you.”

Carmen and Doug nodded their greeting and waited for one of the men to speak. It was easier than trying to ask the right questions to get them started.

In the end, it was Colin who spoke, “Where did you two come from?”

“We had a house over on Hemlock. It burned down last night.” Carmen did the talking; it had always been that way.

“Yes, about two blocks behind it off the main road.”

“What caused the fire?”

“I’m not sure. It could have been a candle that knocked over or something else. We’re just lucky to have escaped with our lives.” Carmen knew what had started the fire, but she wasn’t going to let them in on her secret.

“So it was an accident?” Murphy finally opened his mouth to speak, his high-pitched tone a startling dichotomy to his size.

“That’s what we think.” Carmen and Doug both shrugged their shoulders, not quite ready to show their collective cards just yet.

“So what are your plans?”

The question was brusque and full of hidden subtext: they couldn’t stay. The pair shared another look, talking with their eyes before coming to a decision.

“I guess we’re going to be leaving. There’s nothing else we can do but keep on moving.” Doug spoke to the group assembled before them for the first time.

“Yeah, we think it’s best you leave. We’ve barely got enough supplies for those of us already here and taking on two more would be a real hardship.” Colin spoke the words a little too quickly; it was obvious they were hiding something. “You’ve got five minutes to gather your stuff. You can leave by the back entrance.”

“Just a forest. There’s a trail that will lead you to a suburb. Maybe you can find another house there. Not that there will be much in the way of supplies, most of them have been cleared already.”

They shared another look while getting up. They had nothing to collect and figured it was best to get out and moving as quickly as they could. There was something off about these people, but it was something they couldn’t put their finger on just yet. 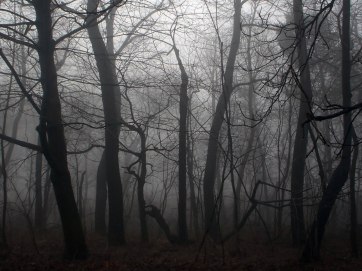