Today I have the wonderful pleasure of featuring an interview with Megan Ralston, author of Preppers. If you’re not familiar with Megan, let’s take a moment to get to know her better…

Megan Ralston is a Vocal Performance major at Cal State University Fullerton who in addition to singing has been obsessively reading and writing all her life. In the end, she thought she had chosen singing, but apparently she couldn’t decide. Her first and only novel, Preppers, was written during the National Novel Writing Month challenge of 2012, and published on a crazy whim.

Welcome Megan! Now let’s get to the questions. Tell us about your zombies? If the dead were to rise, do you think you’d stand a chance against them?

My zombies are not super zombies by any means—they’re your average shufflers and groaners that are mostly effective because they come in such large numbers. Do I think I’d stand a chance? Well, a couple summers ago, my dad and I had what we call our “Zombie Apocalypse Preparation Summer” (Or ZAPS for short). We took a bunch of classes we would never take otherwise—archery, rock-climbing, and tae kwon do—and went shooting on a regular basis to get our aim up. My dad and I even ran in The Walking Dead Escape in San Diego, and took a trip to Las Vegas to shoot machine guns and see “Evil Dead: The Musical.” It’s the most active I’d ever been (I’m an opera singer—my only toned muscle is my diaphragm), so if you asked me that summer, my answer would definitely be an enthusiastic YES. That was my family’s summer of being honest-to-god preppers, and it was great fun. There were matching t-shirts and everything. Now, since I can’t remember the last time I exercised or practiced shooting any sort of weapon, I’d probably have to say no. But if I’m with my dad for the end of the world, that would probably turn into a maybe.

So you really are a prepper – awesome! What was your first experience with zombie media? Was that experience was drew into writing the genre?

I honestly have no idea. My dad’s been into zombies way longer than I have, so I was subtly exposed to them for a while. I think probably my first real active experience was watching the Resident Evil movies, or Zombieland. What really inspired me was our whole ZAPS experience, and deciding to do the NaNoWriMo challenge the November directly afterward. When fishing around for a plot, zombies were fresh in my mind. In the end, though, I wanted to do something that was different from all the zombie media I had immersed myself in during ZAPS. I wanted to write something that was about zombies, but first and foremost more in line with what I usually read and write, YA fiction. I also wanted it to be a lot more introspective and more about the emotional reactions and inner monologue of a survivor than about having gruesome zombie-fighting scenes (which I love reading, but would have had more trouble writing). So I think what mostly inspired me to write the genre was being an unlikely (a dainty singer and lover of YA lit) in the middle of zombie media and a prepper lifestyle. So in a way, I think it’s kind of part of but still separate from the zombie genre… at least, that’s what I tell myself when I read my scathing reviews on Amazon. 😉

Scathing reviews happen to everyone – even Stephen King so we really can’t take them personally. Now it’s time for a Pop Quiz: The item to your left is your only weapon during the Zombie Apocalypse. What is it and what do you think are your chances at survival?

It’s a book, and it’s fluffy chick lit no less. (Kim Gruenenfelder’s Keep Calm and Carry a Big Drink, if you’re curious, which I highly recommend if you’re in the exact opposite of a zombie novel mood.) I’m thinking I’m doomed.

Great choices! We all know that we sometimes have bad luck. Keeping that in mind, what song do you think would get stuck in your head, playing over and over again on an incessant loop?

Ah, well, like I said—I’m an opera singer, and I just learned my first truly impressive coloratura aria. As a result, it’s all my teacher has let me sing for anything (competitions, workshops, masterclasses, performances, auditions, everything) for the last 5 months. So I have had the German aria “Spiel ich die Unschuld vom Lande” from Johann Strauss II’s Die Fledermaus stuck in my head for about as long. As such, it’s not really a great zombie apocalypse soundtrack, but it’s probably the only thing I’ll have stuck in my head for ages.

Thank you Megan for taking the time to answer my questions. If you’d like to keep in touch with Megan, you can find her on her Amazon Author Page, on YouTube, and on her Tumblr Blog. 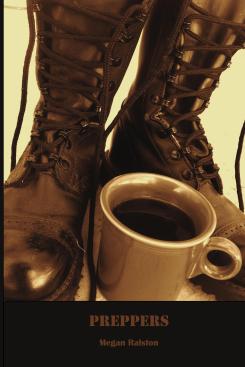 Skylar Anderson and her family have been preparing for the zombie apocalypse for as long as she could remember. But when it finally happens, she finds that nothing could really have prepared her for the reality of a world over-run with the undead—Especially when her parents are arrested as suspects for creating the first zombie. Trying to keep her friends, family, and a hodge-podge group of survivors safe without the guidance of her parents turns out to be a much more difficult task than Skylar could ever have anticipated.

Don’t forget to click on the cover to be taken to Amazon!