Today Jay Wilburn, author of Loose Ends stops by to answer a few of my questions. For those of you unfamiliar with Jay, let’s take a moment to get to know him better… 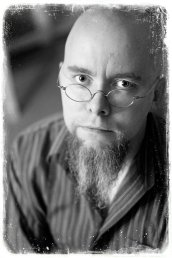 Jay Wilburn lives with his wife and two sons in the swamps of coastal South Carolina. He left teaching after sixteen years to care for the health needs of his younger son and to pursue writing full time. He has published a number of works including the novel Loose Ends: A Zombie Novel and Time Eaters. He has a zombie story in Best Horror of the Year volume 5. Jay is one of the featured authors in the Dark and Bookish documentary project.

Welcome Jay. Tell us about your zombies: if the dead were to rise, do you think you’d stand a chance against them?

I stick pretty closely to the rules of the Romero universe with my zombie short stories and novels. As I have put together collections of stories, I’ve always found it more interesting to work my story within the rules than to do too many stories that all hinge on “what if zombies could fly?”, “what if zombies had mouths everywhere?”, “What if zombies could eat data from computers?” Oh, crap now some of those sound good. I CALL DIBBS!

I’m not sure about my chances. I’m torn between slim or none. I’m not good with running, I don’t like work, I have the cold, I’m in rough shape without food … my medicine … caffeine, and I need my sleep. I’m surprised I’ve survived the pre-apocalypse now that I think about it.

I have taken up archery, but I’m not even a danger to the target at this point.

At least you’re honest about your chances… Being realistic is always a good thing. What was your first experience with zombie media? Was that experience what drew you into writing the genre?

A friend of mine told me the entire plot to Dawn of the Dead and Day of the Dead one night. The next time I was near a video store, I rented the video tapes of both movies and watched them a dozen times in the five days I had them. My mind raced on the possibilities. I wasn’t aware of many other zombie films until the floodgates opened some time later in the late 90’s and early 2000’s.

I imagined many different survival scenarios before I ever wrote my own stories.

Pop Quiz: The item to your left is your only weapon during the Zombie Apocalypse. What is it and what do you think are your chances at survival?

An Apple shaped cookie jar. I will conquer the world with it.

Do you remember my earlier comment about being realistic? Yeah, I’m taking that back now… Tell me your five favourite pieces of Zombie media.

Dawn of the Dead (the original)

We all know that we sometimes have bad luck. Keeping that in mind, what song do you think would get stuck in your head, playing over and over again on an incessant loop?

“Walking in a Winter Wonderland” This song was caught in my head off and on consistently from 2000 through early 2005. It still pops up every now and then, but after those five years, nothing scares me in the “stuck in your head” category anymore.

Now before we go, let’s take a look at Jay’s novel Loose Ends…

Loose Ends is the story of three cooks and a mute boy (the narrator) who are the only survivors of a raider attack after the zombie apocalypse. They proceed to look for a new home, but in the process uncover the darkness in each other’s pasts.

Everyone has to eat. This is true for humans and it is true for zombies. Three men have managed to survive the apocalypse by cooking for those that do the work of rebuilding. Sometimes they worked for noble men and sometimes for evil opportunists, but they survived by doing it well. When they become the last survivors by hiding from an attack and they are only cooking for themselves, they begin to think surviving may not be enough. After years of living through a zombie apocalypse apart and together, they find themselves alone again and in need of a new home.

As they strike out together to search, they begin to explore regrets and unfinished business from their past lives. They might lose themselves for a while in their shared art of preparing the food they eat, but they must also keep from being eaten by the monsters that roam the Earth, both living and undead. “Chef” David Sharp, “Short Order” Shaw Porter, “Doc” John Brown, and a mute boy they call Mutt are on a journey to tie up their many loose ends.

They will discover that their past actions have had far-reaching consequences. They may find destruction or redemption, but they will have to fight the past, themselves, and the walking dead every step of the way.

**Clicking on the cover will take you to Amazon!**

One thought on “5 Questions with Jay Wilburn”