Today on Days with the Undead we feature an interview with Sean Munger, author of Zombies of Byzantium. For those of you unfamiliar with Sean, let’s take a moment to get everyone better acquainted… 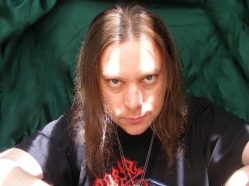 Sean Munger is a longtime Oregonian, oenophile and lover of history. A former attorney, he is now a teacher and student of U.S. history, working toward a Ph.D. He has also written extensively on heavy metal and the worldwide metal music scene and briefly wrote for a regionally-produced cable TV horror series.

Zombies of Byzantium is Sean’s first book for Samhain Horror and reflects his longtime interest in medieval history. He has previously written science fiction and historical fiction. Sean’s second book for Samhain Horror, The Zombie Rebellion, due out in 2014, brings him back to his professional specialty of Early American history.

Welcome Sean. So tell us: why Zombies? Is there anything specific that draws you to the genre?

With the exception of a short story, I had never actually written horror before I began writing Zombies of Byzantium. When I got the idea for it I was thinking more in terms of the historical setting—“How could I make an interesting, exciting book set in the Byzantine Empire?”—and the idea of zombies made sense for a number of reasons. First, it’s usually associated with modern horror. Until recently you haven’t seen a lot of “historical” zombie stories, so I thought Zombies of Byzantium would be something relatively new. Second, the nature of the horror in a zombie story has great possibilities to draw out interesting elements. The best zombie stories focus not on the conflict between humans and zombies, but the way humans deal with the threat. And finally, zombies are a lot of fun! It was really great trying to do something more “modern” but in a very old setting.

I’ve got several irons in the fire. My second zombie novel, The Zombie Rebellion, will be released by Samhain Publishing in May 2014. That’s also a historical zombie book, set during the Whiskey Rebellion, which was a little-known uprising that occurred in the backwoods of Pennsylvania in 1794. Right now, totally unrelated to zombies or horror, I have a serial running on the website JukePop Serials. It’s called The Armored Satchel and it’s a spy thriller set during World War II. (Link: https://www.jukepopserials.com/home/read/501) Finally, I am working on a new horror novel, called Doppelgänger. It’s not about zombies, but instead a modern horror twist on the old Victorian haunted house story. It should be interesting.

I purposely made the zombies in Zombies of Byzantium quite traditional. They’re “slow” zombies, mindless brutes, terrifying more in numbers and their inexorable nature than their individual abilities. What’s different, I think, is how the human characters react to them. If a zombie outbreak occurred in the modern world, we would give a lot of thought to understanding the cause—“Why is this happening, and how do we stop it?” In medieval Byzantium, in the 8th century A.D., they wouldn’t think that way. Byzantines were very mystical, religious people. Something like a zombie outbreak they would simply assume is a punishment from God, and they wouldn’t think much more about the cause. Therefore, the characters in Zombies of Byzantium are more focused on wiping out the threat and worrying about the cause—and the theological implications—later.

My favourite is the technical “Bible” I used while writing Zombies of Byzantium, which is Max Brooks’s The Zombie Survival Guide. It scarcely left my desk during the entire time I was writing the book. Of course I love Brooks’s World War Z as well (I haven’t seen the movie yet). I can’t say I read a lot of zombie novels, but I do like Mikhail Lerma’s Z Plan: Blood on the Sand. I’m also intrigued by Scott Kenemore’s Zombie, Ohio: A Tale of the Undead, and the historian in me can’t resist Josh Miller’s A Zombie History of the United States.

Hands-down my favourite is Jacques Tourneur’s 1943 masterpiece I Walked With a Zombie. It’s so atmospheric and dark, like a film noir with zombies, and there are very few movies ever made that are quite like it. Of course there are the classics, Romero’s original Night of the Living Dead from 1968, and Victor Halperin’s White Zombie with Bela Lugosi from 1932. I love to laugh at Return of the Living Dead, which is a really clever send-up of the whole zombie genre, and I think showcases the wonderful talent that Dan O’Bannon had—it’s a shame he didn’t direct more films. (Okay, that’s four—sorry!)

I think the interest has always been there, or if not always, for a very long time. If you look at sort of the “bestiary” of traditional horror creatures—vampires, werewolves, and zombies—while it’s true that zombies are probably the one that got into the culture most recently, the concept has been around for many decades. The word “zombie” entered our language in 1891. Vampires and werewolves date back to the Middle Ages. The wonderful thing about traditional stories is how you can reinvent them for a new generation and make them seem completely original. The Walking Dead is just another reinvention, as was Night of the Living Dead. The cycle will continue for as long as people find something visceral and compelling about stories that frighten and horrify them. Horror is as old as humanity. I’d like to think that storytellers will continue to reinvent tales of mythological creatures, like vampires or zombies, to entertain and terrify each other, as they have done for centuries.

(1) My laptop. Until the power goes down, I can use it not only to keep track of the situation as it develops, but also to Google things like, how do you build a Molotov cocktail?

(2) The sword leaning up against the wall of my living room. I write medieval fiction, and I collect medieval weapons!

(3) Ditto for the battle axe, though the blade is rather dull.

(4) Although it’s out on the patio—does that count?—I would grab the propane tank from my barbecue. In a worst-case scenario it could be fashioned into a bomb or flamethrower.

(5) Books, which my house is full of. Not only would they make great insulation and “stuffing” for barricades, but if fires need to be lit in strategic places, the paper will make good fuel.

Well Sean if what you’ve got are books and a dull battle axe, I’m not sure you’re going to make it… Let’s hope that Google comes in handy for you!

Now let’s take a look at Zombies of Byzantium…

Taking place in Byzantium (the Eastern Roman Empire) in 717 A.D., Zombies of Byzantium is the story of Stephen Diabetenos, a young monk who specializes in painting icons. Sent to a neighboring monastery to replace a dead painter, Stephen and his friend Theophilus happen upon a small country village that has been hideously ravaged by the undead. After a pitched battle with the ghouls at a local inn, Stephen and Theophilus decide they must hurry to Constantinople, the capital, to warn Emperor Leo III about the outbreak of undead flesh-eaters and appeal to him to send a Byzantine legion to destroy them. Unfortunately Leo has other things on his mind–such as the impending siege of Constantinople by the Saracens, the Byzantines’ mortal enemies. When Leo decides he can kill two birds with one stone by using the ghouls as a weapon against the Saracens, all hell breaks loose–with very bloody results!

Clicking on the cover will take you to Amazon!