Today I have the pleasure of interviewing Julie Cooper Brown, author of the The Last Days Series. For those of you unacquainted with Julie, let’s take a moment to change that…

Julie A. Brown, also writing as Julie Cooper Brown. Julie has always loved to write poetry and the like in her younger years. She has written The Last Day in the Life of Jillian as her first attempt at writing fiction and hopes to break through with this new novella. Julie enjoys playing guitar, piano and violin though she is unable to read music. And although she has no degrees to brag of and only an eighth grade education, she is confident in her writing and only hopes to improve her technique in the future.
Julie has three children from a previous relationship and three step-children with her husband of six years, Jeremy Brown. They currently reside in North Fort Myers, Florida.
Julie has several siblings and credits her vivid imagination to all the pretending they had done as children. Julie has also been a short order cook for 25 years and hopes to be able to let that go if her books are successful.

Welcome Julie! So tell us: why Zombies? Is there anything specific that draws you to the genre?

The thought of the dead rising to walk the earth has always frightened me, so I became addicted to my fear. I love to be afraid of the zombies! They are not real! Yet, they scare me worse than any Friday the 13th (or similar –  really could happen movies) ever did. So, needless to say I love Resident Evil and any game that involves killing zombies or solving mind bending puzzles to find the cure or the way out. So, when I became bored while unemployed, I wrote a story that would reflect how I may deal with a zombie apocalypse if one were to occur.

My latest project is Book IV of The Last Days Series. Titled The Dead Live On.

In book III, chemical bombs were set off throughout the United States… Book IV will reveal just how effective the solution really was. That’s all I must say. J I do have recurring characters.

My zombies are different because they actually have a fully functioning conscience. They know who they are, and they know what has happened to them. Though they have no control over their actions, their bodies occasionally respond to the emotions of what they are thinking. Also, some of my zombies go through a half stage… Where they are still fully functional but are over whelmed and controlled by the hunger for flesh; so you can see and feel the anguish they suffer over the acts that they are committing.

Honestly, I have never read a zombie book. I do love the horror genre, I read King, Saul, Koontz, Rice and Keene mostly.  So, I was unsure of how my zombie fiction would turn out.

Oh, that’s easy because I have watched plenty of those.

Night of the Living Dead

Dawn of the Dead (original, though the newer version was great as well)

Zombie Nation… Geez… (just cross your eyes and shake, you’ll do fine), though I have a favourite dialogue from that movie as well…

“Well, what do zombies eat then?” Asks the terrified poorly made up teen zombie…

I do. The Walking Dead is a fantastic show, great story line, awesome scary zombies and a great cast. There are a lot of people I know personally who didn’t care much for zombie pictures until they watched The Walking Dead. Now, they are hooked and will be hard pressed to find something as entertaining to watch.

A lamp, a machete, (my husband brought home to sharpen up for his step-father just yesterday lol), nunchucks (also my husband’s), baseball bat, and an extension cord??? Lol Everything else in here is too heavy to use as a weapon.

You may well survive Julie, but only just barely!

Now let’s take a sneak peek into the book that started the series, keeping in mind that the 4th book is set to be published on August 21st!! And now for a little The Last Day in the Life of Jillian… 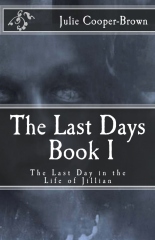 Jillian and Evan are trapped and Evan is ill. Jillian recalls the events that have led to their demise, as well as documenting the stages of Evan’s infection as he changes into a being she used to love to be afraid of.

Thank you Julie for taking the time to answer my questions. If you’d like to find out more about Julie’s work, check out her website!