Recently I joined 32 other women who wrote in the Zombie genre and we released a fantastic compendium of undead treats for lovers of the genre! It’s called Darlings of Decay and the best news is that it’s a FREE download on Smashwords! What a great way to try samples of some of the greats writing in the genre! Click on the cover and it will take you straight to Smashwords.

Today I bring to you an interview with Rebecca Snow. We share a last name and love for zombies but I swear we’re not related! At least not that we’ve been able to figure out – yet… For those of you unfamiliar with Rebecca’s body of work, here’s a little information about her: 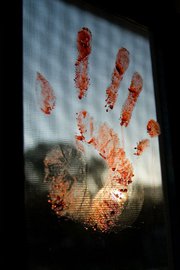 Rebecca Snow is a Virginia writer who travels as much as her homebound geriatricats allow.  Her work has been published online and in numerous small press anthologies. You can find her online at cemeteryflowerblog.wordpress.com, on Twitter @cemeteryflower, and on Facebook.  Look for the bloody handprint.  She’s working on a novel or two even if she doesn’t know how they end.

Welcome Rebecca! So tell us: why Zombies? Is there anything specific that draws you to the genre?

Zombies are incorruptible.  They don’t care who you are, what your social standing, who your friends are, how much schooling you’ve had, how many awards you’ve managed to accumulate, where you live, or what you’re wearing.  If they can find you and grab you, they will try to eat you.

I’m starting a photo bloggy thing involving zombies, but I haven’t fleshed the whole thing out in my head enough to discuss it.

I could always say, “Because I wrote them,” but I’ve used that answer so often it makes me sound like I need a bigger door to get in the room.  Seriously though, no two people write alike.  But some of my zombies are a little different.  Some can think.  Some have different motivations than brains.  Of course, some are just plain zombies.

Has there been a Zombie novel or short story that has inspired you to write in the genre? If so, tell us about it and why it inspired you.

Not really, but there are lots of zombie stories and novels that KEEP me writing in the genre.

What is your all-time favourite Zombie book that you didn’t write?

There are so many.  I really like David Moody’s Autumn series.  Joe McKinney’s stuff.   If I had to pick an absolute favorite though, it would be Mira Grant’s FEED.

Do you feel that gender plays a part in getting noticed in the genre? If so, why do you think readers are more comfortable reading Zombie works written by men?

I’m really not sure if gender plays a role in getting noticed.  There are a lot of talented (and noticed) female writers in the genre.

Have you ever thought about using a male pseudonym to sell more books?

Not a chance.  If someone’s making a judgement call on what my chromosomes say, it’s their loss, not mine. And even if it did make a difference, I’d feel like I’d compromised myself.  I don’t begrudge writers who do use pseudonyms.  We each have our own perspective.

Characters or gore – what do you spend more time writing?

Zombieland, Shaun of the Dead, Pontypool (Although I’m not sure that could be considered Zombie)

Holy crap! Someone else has seen Pontypool! I love that movie and the book is awesome too. On another note, I live near Pontypool (seriously). Do you think the popularity of The Walking Dead and its appearance in mainstream media has helped to increase the popularity of the genre, or has there always been such an interest?

I think the interest has been there, it’s just that it wasn’t as accessible as it is now.  There were years that I’d go looking for zombie novels and get looked at funny in the book store.  That’s definitely changed.  I still get funny looks, but now it’s for the dancing.

I’m not allowed to say, but I’d be well protected.

I’m sorry Rebecca, but without prior knowledge of what you have, I’m going to have to surmise that you won’t survive…

A huge thank you to Rebecca for taking the time to answer my questions!