Zombie Film Fridays is alive with a great ZomCom called Dead & Breakfast. If you haven’t seen this one, you’re going to want to – it’s got crazy comedy in all the right places and just the right amount of cheese to satisfy your desire for it! 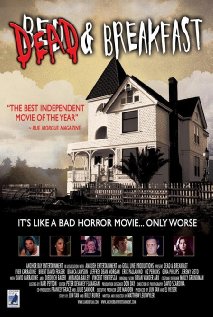 Six friends take a road trip to Galveston in an RV for the wedding of their friend, Kelly. The driver, Johnny, gets lost and they arrive in the small town of Lovelock and his friends Sara, Kate, Melody, Christian, and David, decide to spend the night in the Bed and Breakfast owned by the creepy Mr. Robert Wise. David has an argument with the chef of the inn, Henri, and when the chef is found dead and Mr. Wise has a heart attack in the middle of the night, the local Sheriff suspects the group of travelers and tells his Deputy, Enus to seize the keys to their RV and stay in Lovelock for the duration of the investigation. Then the Sheriff arrests “The Mysterious Drifter” who soon becomes his prime suspect. When the clumsy Johnny accidentally breaks an ancient exotic wooden box belonging to Mr. Wise, he releases the terrible, monstrous “Kuman Thong” and the evil spirit held inside escapes and possesses all the local town folk, transforming them into zombies. Ultimately, “The Mysterious Drifter”, becomes our Hero. He is a long time student of powers from “the other side”, and a relentless hunter of the dreaded, evil “Kuman Thong”. He is the only one who knows how to fight and kill the evil spirit, which he does with the help of Sara and Melody, saving only the two remaining girls and himself, before leaving the destroyed horrible and destroyed Bed & Breakfast, and the pitiful ravaged town of Lovelock behind for good.

Interesting Facts: The Bed and Breakfast house is located at the Concannon Winery in Livermore, CA. While it is unusable and has been for many years, there is talk of it being renovated into a real bed and breakfast in the future, 34 gallons of “blood” were used over the course of the shoot. 4.5 gallons of “blood” were used just to cut off Erik Palladino’s head, and Erik Palladino’s driver’s license is still blood stained from his battle with a chainsaw.

And now its time for the trailer!