I saw Warm Bodies in theaters and I have to say I actually liked it! I also reviewed it for DarkMedia Online and you can read my thoughts on the film here. 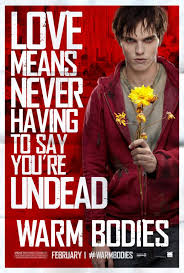 With much of the future world’s population rendered into an undead horde, R is a young, and oddly introspective, zombie. On a feeding encounter with a human gathering party, R meets Julie and feels an urge to protect her. What happens with that is the beginnings of a strangely warm relationship that causes R to start to regain his humanity. As this change spreads throughout the undead population, Julie and R eventually find they are facing a larger issue even as their friendship is challenged. Caught between the paranoid human forces and the ferocious Boney zombies who are a mutual threat, R and Julie must find a way to bridge the sides to fight for a better world no one thought possible.

Interesting Fact: The actors portraying the zombies in this film chose not to blink. It was particularly uncomfortable for Nicholas Hoult who did a few long scenes without blinking. Later in the film (when the zombies become more human), the zombies start blinking.

Honourable Mentions for the letter W: Waxwork, Wake the Dead