For my bonus post today, I would like to talk about my favourite (Zombie) video games turned into movies: the Resident Evil franchise. I can remember playing the game and completely immersing myself in the world of the S.T.A.R.S. and then when the first movie came out, it was a departure from the game, but still believably set inside the world. Since the release of the first film, it’s been an enjoyable ride watching Alice survive.

The first movie in the franchise, sets up the subsequent films and introduces you to many of the characters you will encounter throughout. The only ones that are static throughout the entire franchise are Alice and the undead. Alice is played by the magnificent Milla Jovovich and she is supported along the way by a number of fabulous actors: Michelle Rodriguez, Sienna Guillory, Mike Epps, Oded Fehr, and Ali Larter to name but a few.

I reviewed the franchise over on DarkMediaOnline and you can check out my reviews of each of the movies should you like:

Since my movie for the letter R is not Resident Evil – let’s take a moment to look at it: 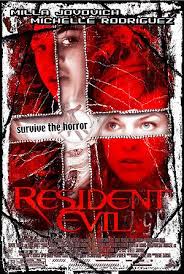 A virus has escaped in a secret facility called “The Hive,” turning the staff into hungry zombies and releasing the mutated Lab “Animals” that they were studying. The complex computer shuts down the base to prevent infection. The parent corporation sends in an elite military unit, where they meet Alice, who is suffering from amnesia due to exposure to nerve gas. The military team must shut down the computer and get out, fighting their way past zombies, mutants, and the computer itself, before the virus escapes and infects the rest of the world. Alice must also come to terms with her slowly returning memories.

Interesting Fact: The film was originally titled ‘Resident Evil: Ground Zero’, but the title was changed to just ‘Resident Evil’ after the 11 September 2001 terrorist attacks on the USA, the password into the Red Queen’s Chamber is “12177”, and even though they’re everywhere, the word “zombie” is never spoken in this film.

There are also tonnes of references to Alice in Wonderland… Main character’s name is Alice. Computer is named ‘Red Queen’. ‘The Red Queen’ needs to kill someone who is infected, so she tries to get someone else to chop off their head (Off with her head!). There is an Alice in Wonderland paperweight in the movie. A white rabbit was use to test the T-virus. To enter the hive they go through a mirrored door (through the looking-glass). The Red Queen also succeeds in cutting off “her” head (the medic in the laser hallway). – Kaplan worries about time, as the White Rabbit does. Matt is sitting on the ledge when Rain and JD hear the first zombie (reference to the Caterpillar).