D is for Doghouse, another UK ZomCom that I simply adore! 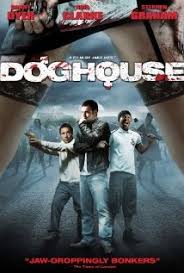 Vince is handling his divorce badly. He’s depressed. Gone to pieces. But his mates aren’t giving up on him. Struggling with their own women troubles, they drag him off for an ultimate lads drinking weekend in the country. Arriving in the village of Moodley where the women outnumber the men 3:1, the boys find themselves holidaying in a village overrun by psychotic, homicidal Zombirds with a thirst for male flesh.

Honourable Mentions for the letter D: Dawn of the Dead, Dead & Breakfast, Doom

And now for the trailer!

6 thoughts on “D is for Doghouse”