Today on Days with the Undead, we’re going to take a few moments to talk to Morgan Barnhart, co-founder of the Zombie Response Team and co-author of Prepping on a Budget. Welcome Morgan, why don’t you take a moment to introduce yourself.

Tell us Morgan, what prompted you to get prepped?

We realized many years ago that we were not as prepared for disaster as we thought we were. We’d always talk about what we might do, but we never got prepared for anything. One day, we just decided to start prepping and decided to join other communities to learn from each other. Anything can happen tomorrow, and I don’t know about you, but I’d rather be prepared for it rather than scrambling to figure ‘something’ out or to have to rely on other people for help.

Did you turn to any resources to help you get started?

Oh yes, there are a ton of great communities online, as well as tons of books and even local communities. It’s easy to find other people who are preparing, we’re not all ‘doomsday’ preppers, in fact, most of us aren’t. We’re just normal people.

What is a normal day in the life of a prepper?

We live our lives just like everyone else. We have jobs, we have social lives, we watch movies. We also just happen to keep an eye out for exits and escape routes. We also happen to prep on the side by filling old milk jugs with water and storing them, buying extra non-perishable food and storing it, making our own solar panels, etc. It’s more like a really fun hobby.

Apart from preparing supplies, what else do you do to prepare?

Tell us about your book – Prepping on a Budget.

It’s a short book that briefly talks about how to prepare while on a budget. There are actually so many cheap and/or free resources out there to help people get prepared, there’s just no excuse not to be!

Night of the Living Dead, Shaun of the Dead, 28 Days Later

Oh The Walking Dead absolutely increased it. It’s always been a steady genre, but with the introduction of The Walking Dead, there’s been a huge burst. In fact, the genre has been going strong for a long time, which makes us a bit nervous as we fear people will suddenly get sick of zombies and ward off the whole genre since they’re in the media all the time these days.

My diamondback 9mm, browning knife, the lid from the back of the toilet, computer monitor and a baseball bat.

I had never considered the lid off the back of the toilet as a weapon before – thanks! Sounds like you definitely have the will and the skill to survive.

Now let’s take a peek into Prepping on a Budget… Don’t forget to click on the cover to be whisked away to Amazon! 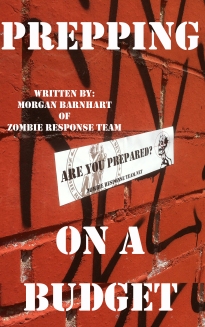 Many Zombie Response Team members don’t have a whole lot of disposable income, which is what inspired ZRT to release this free eBook for every prepper out there who feels out of the loop or uncertain about their gear or education because they can’t afford “the best”. This eBook goes into detail about where you can find cheap, yet reliable, gear. It also goes over how to find FREE education. You don’t need to have thousands of dollars to be a prepper, you just need what’s going to work for YOU, including what will work for your budget.

The Zombie Response Team is also giving away one copy of the digital and audio version of both of their books Prepping on a Budget and Could the Zombie Apocalypse Become a Reality! If you’d like to enter, follow the link!