Today I’m joined by an author that goes by the name of HorrO. Let’s take a moment to get acquainted with him.

HorrO runs three sites, all under HorrO’s House of Horror. The site that started it all was HorrO’s Gory Reviews. Then he started The Dog Days in Zombieville. Now HorrO also runs the rapidly growing PromoteHorror.com. They keep him plenty busy. When not in the horror world, HorrO studies accounting and learns to trade stocks.

Welcome HorrO! So tell us, why Zombies? Is there anything specific that draws you to the genre?

Well, the original idea behind ‘The Dog Days in Zombieville’ (DDNZ) was more about a virus than zombies. As I developed the story, zombies just kind of made sense. There are so many fans of zombies out there, why not? As far as why I like zombies so much, it’s because they just keep coming, and all they want to do is kill. They can make such a beautiful bloody mess.

Tell us about ‘The Dog Days in Zombieville’. 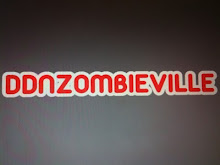 First, DDNZ is a Twitter story, meaning it’s tweeted on Twitter first, and then posted on the site. So it’s still ongoing at this point. Because it’s a journal, the surprise is that it can end at any point. When it does, I do have an idea for a sequel, and possibly a trilogy. Besides the journal, my focus lately has been on growing PromoteHorror.com. The name says it all. It’s where I promote anything horror related. If you are a horror fan, stop by and check out the promotions. If you need a promotion, all you have to do is ask.

PromoteHorror.com is a great site. What makes your Zombies different, if anything?

These zombies have some slight dog like characteristics. They can hear and particularly smell better than they could when they were humans. And yes, these are fast zombies. There are a few other things, but that’s for the reader to try to figure out.

Fast Zombies – my least favourite kind! What are your 5 favourite Zombie books that you didn’t write?

Managing all my sites takes up most of my free time so it’s been a while since I’ve read any books. I think the last zombie book I read was Zombie, Ohio. Other than that, I guess I will plug a few books I’ve recently promoted: The Creepers, Zombie Night in Canada: First Period, 900 Miles, and End Storm.

Some people consider it a borderline zombie film, but I love 28 Days Later, and its sequel. Got to give some love to a zombie comedy so I pick Zombieland. And a movie I might like so much because Syfy plays it all the time, Dawn of the Dead (2007). And I’ll throw in a bonus recent movie you should see if you haven’t Juan of the Dead.

Great choices HorrO. I haven’t seen Juan of the Dead yet, so I’ll be sure to keep an eye out for it. Do you think the popularity of The Walking Dead and its appearance in mainstream media has helped to increase the popularity of the genre, or has there always been such an interest?

When I really got more involved in horror with my sites, it really opened my eyes up to how many people love zombies. I knew it was big, but not to this extent. I think it’s great what The Walking Dead has been able to do. I know people that aren’t necessarily horror fans that watch the show. I think The Walking Dead along with American Horror Story are great for horror, and display that there is a place for horror on TV.

I might be out of luck! Let’s see, I know there are some golf clubs, and a bat. Something my character uses, a pen. I could break the legs off this small table, but that might be more useful against vampires. Hopefully my phone has an app for the zombie apocalypse.

You might be screwed HorrO! Let’s hope the Zombie Apocalypse doesn’t happen soon… Thank you for taking the time to answer my questions. If you’d like to connect with HorrO, you can find him on any of his sites, which all have Facebook and Twitter accounts as well. Here’s a list of links –