Today I am joined by Emily Walker, the author who has the perfect last name for writing about Zombies (too bad she doesn’t use it!)! Her book Zombified is due to be re-released in March under the pseudonym of Lyra McKen. For those of you that have yet to hear about Emily or Lyra, we’ll take a moment to introduce her to you…

Emily Walker is writer who writes as Lyra Mcken for GMTA Publishing and Jewels Moss for Midnight Fire! She is also described as a Self-Pubbing Maniac! Her favorite author is Heinlein, but she also has a weak spot for Jane Austin.

Her recent novels include The Reluctant Succubus with Midnight Hour Publishing, Why Yellow Jackets Can’t Find the Hole with Midnight Fire Publishing and then a self-published release Long Road Full Speed Ahead.

Welcome Emily, tell us – why Zombies? Is there anything specific that draws you to the genre?

I love the horror genre, and I just have a fascination with the end of the world and zombies. There isn’t really an explanation for it! Maybe I am a little disturbed.

Tell us about Zombified.

Zombified will be out with the Horror imprint of Great Minds Think Aloud Publishing, Grimiore on March 15th! I am so excited with this re-release which has gone through rewrites and a deep and very fun edit!

Awesome news! What makes your Zombies different, if anything?

Ooh, that’s creepy! What are your 5 favourite Zombie books that you didn’t write?

Reign of Blood {they are vampire zombies}

Shaun of the Dead

Night of the Living Dead

I think that The Walking Dead has had a significant increase in the genre’s popularity. I feel like the influx in Zombie movies is related to it being more popular in television and books. That being said, I think that happens anytime there is a Zombie movie. Zombieland came before The Walking Dead, and Diary of the Dead, Dawn of the Dead, 28 Days Later and several others were released close together. The same thing happened for zombie culture with the release of Night of the Living Dead. There are always going to be Zombie enthusiasts, but there will always be more when the media is paying the genre more attention.

A pistol, a knife, a shotgun, a heavy vase, and my boyfriend! I am in a good room for that right now.

You may well survive Emily… Now let’s take a sneak peek into Zombified! 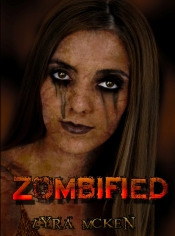 Cassie is a typical teenager.  She’s crushing on a boy and trying to make it through high school. It’s a typical day of classes when all hell breaks loose. Forced to run and hide the situation just keeps getting worse. She makes a mistake and soon becomes infected. She meets others like her and together they sent out to find a cure. Is their fate already sealed? Can they find a cure before it’s too late? See what happens through the eyes of the infected when Cassie tells you how Zombies are people too.

Thank you Emily for taking the time to answer my questions! If you want to connect with Emily, you can find her on Twitter, her website, or on Facebook. If you want more information about Zombified, you can check out Lyra McKen’s website.

Don’t forget to come back next week when I talk Zombie serials with HorrO!