Today I’m joined by Eddie Rotten, author and podcast host (among other things). For those of you unfamiliar with the force that is Eddie, let’s take a moment and learn a little bit more about him… 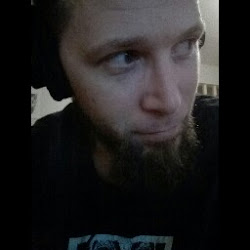 You’re either with us or against us… And you don’t want to be against us! ZOMBIE FIGHTER. SECRET MILITARY and GOVERNMENT RESISTANCE WARRIOR. TRUTH SEEKER. HOUSTON TX ZOMBIE FIGHTER CHAPTER CAPTAIN. Find Eddie at http://eddierotten.com or on Twitter at @EDDIEROTTEN.

Welcome Eddie. So, why Zombies? Is there anything specific that draws you to the genre?

The word ‘zombie’ provokes imagination, fear, and most importantly love. Life usually revolves around one of those three things, and with ‘zombies’, you get all three. I am ultimately drawn to the genre because of my fear to be forced into survival mode. I’ve got the regular amount of food and water storage any other red-blooded American/Canadian, or whomever else reads this, but the fear to actually have to use my reserve resources is what drives me to write about it. And fortunately enough, it’s what drives people to read about it. Everyone loves a good spooky story, but zombies bring an element of love, compassion, humanity, and humbleness to the table.

Tell us about your latest project; published or otherwise.

My latest project can be found at www.eddierotten.com. It started on Twitter, then leaked over to Facebook, then to the Android app store, and now it has created its own podcast… I know. Crazy right? What happened was, I started writing little things on Twitter (as most of us do). When people responded, whether good or bad, I decided to make those people part of my story. So I had people send in their character name, weapon of choice and so on. Before you knew it, I had an army of zombie fighters that interactively wrote their own ideas for my story. I quickly made a blog site for it. The idea went viral and I had zombie fighters and villains filling up my inbox. It was too much for me to ignore. I commissioned my wife (badass graphic artist) and had her design me some zombie images. I then called up my computer whiz and had him create an app for Android (Apple is waaaaay over-priced). The story just took off. Its epic, sad, conspiracy driven, bloody as all hell, and pretty darn scary if I do say so myself. Some of the characters are in the military, so naturally their stories became technical and gave an inside to our government and the state of the world. That’s about the time I got kicked off twitter. They didn’t like every thing I had to say about our current leadership and the worlds’ affairs. So I had to scale back from politics. The story turns out to be a time capsule over the last two years for the world… with zombies. Anyway, all this hype and another character contacted me and decided it was time for the entire world to know about ZOMBIE LIFE (which is the name of the app). We created Jig and Eddie Rotten’s ZOMBIE LIFE PODCAST. It can be found on Stitcher, iTunes, Soundcloud, Spreaker Radio, and all the others. The podcast has been on Switchers coveted MOST SHARED LIST for several months in a row and I am very proud of the interest.

My zombies are different because they are created by government-controlled frequencies. As you read the story, you learn how the government introduces new devices to us each year slowly merging our minds into a new frequency, and their plan to shut the frequency off at some point, ending all humanity. The parallel in the story though isn’t so much that were being attacked by zombies, but that zombies are what our problems are. Things that we have to deal with. The zombies in my story are killers yes, but we still have school, work, go shopping, walk the dog, etc. Well, we have it all for a while. Then things change.

Awesome! What are your 5 favourite Zombie books that you didn’t write?

My 1st favorite zombie book is easy. It’s Days with the Undead: Book One by Julianne Snow. It wasn’t at first, but after reading it a few times, people in my life started reminding me of the stories characters. And the brotherhood and fellowship of the people in that story are honorable. So that’s my first. Second is Simon Neilson’s Kaleb. Just a good, solid book that explains things in perfect order. My imagination clings to the way he writes, and I love it. 3rd is Stephen King’s Pet Sematary. I know, I know. Not exactly a zombie movie. But things come back from the dead! And when I was young, I had a dream about that happening, and then when I came across his book my jaw dropped to the floor. I don’t really have a 4th and 5th. I don’t really read many other zombie stories, as I don’t like to have outside influence on how my writing is. Works for me.

My book? Wow! Thank you for the compliment! Tell us about your top 3 favourite Zombie films?

Top 3 films. Shawn of the Dead, Night of the Living Dead, and all ‘B’ movies containing zombies. Shawn of the Dead is an instant classic for the crude comedy alone. NOTLD will always stay close to my heart because…well it’s NOTLD for crying out loud. And all the B movies? I love the effort people put in to production, story and sound on their own time. After school, works, after the kids go down for naps, these people make their dreams come true and as cheesy as they are… They are DOING it. You know?

I love the cheesy B-movies – they’re so much fun! Do you think the popularity of The Walking Dead and its appearance in mainstream media has helped to increase the popularity of the genre, or has there always been such an interest?

As far as The Walking Dead, dare I say it’s as important as Night of the Living Dead? There will never be another show like that. There will only be attempts to be better, but what AMC and the actors have done was totally recreate the imaginary ideas of the graphic comic. And they’re kicking ALL kinds of ass doing it. So, yes. It has definitely made the genre stronger, and also brought families together, taught survival and brotherhood, and compassion to those who don’t have much. TV is different because of The Walking Dead.

You really are screwed Eddie… Especially if you think toenail clippers would get you the secret antidote! I would like to thank Eddie for answering all of my questions and I hope he’ll come back once FrequenZ comes out!

Don’t forget to join me next week when I’ll be joined by D. Alexander Ward!

One thought on “Chewing Braaiiinns with… Eddie Rotten”