Today I am joined my Jon ‘Double Tap’ Britton, Zombie enthusiast and author. Welcome Jon, take a moment and introduce yourself. 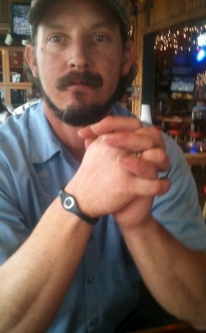 A little about me, I’m married to my lovely wife Sharon and have two adult sons, J.T. and Steven. I served in the United States Air Force and my current profession is that of a licensed plumber. I run a Facebook fan page called Z.S.A Texas, write articles for Brains Magazine and also help admin Cold Dead Hands which is a 2nd Amendment Advocacy page, not zombie related, but I manage to slip zombies into the conversation every chance I get. I also blog and forum moderate on CDH’s website http://colddeadhands.us where I tend to handle the zombie and ‘prepper’ forums. Somewhere in among all of that I work on my books.

Why Zombies? Is there anything specific that draws you to the genre, Jon?

The first zombie piece I ever wrote was on that very subject. I have always been a fan of the genre in movies, but not excessively so. A friend introduced me to the whole zombie subculture and I was hooked. I have actually written two pieces on the subject of ‘Why’. One can be found in my Facebook page notes here and the second which was a more in-depth exploration titled Rise of the Undead: Memetics and the zombie sub-culture is published in Brains Magazine issue #3. You can order the hard copy of the magazine or get a free digital download here.

My latest project is in the pipeline to be published in the near future, no date set yet. Through my Facebook page Z.S.A Texas, which is a regional site that is part of the Zombie Safe Area community, I met Samuel Garcia, author of Dead Air: A Zombie Novel and he had an idea for a follow-up anthology. He was looking for aspiring authors to write a short story based on the events in his original novel, but from their own perspective in whatever part of the world they lived in. Thus, Dead Texas was born. It will be included in the Dead Air Anthology with an option to extend it to its own full length book which I plan to do at a later date.

I am just now writing my first book with my own story line and my own zombies. My goal right now is not to redefine what a zombie is, but rather to dabble in the causes and the survival aspects. Although, I do have a unique zombie-type that I am planning to write about in my next book. All I can say at this point is that it will have strong religious overtones and possible repercussions. How’s that for a teaser?

That certainly is a teaser! What are your 5 favourite Zombie books that you didn’t write?

Ironically, I’m not a big zombie book reader. Dead Air was the first and only zombie book I have read and that was strictly in research for my short story since I had to follow his story line. Sam is a gifted writer, but by not reading other peoples’ works, I’m not tempted to plagiarize, either intentionally or unintentionally.

1968 Night of the Living Dead has to be #1, not because of the quality or the story, but simply because it gave birth to the entire genre that is still alive and thriving to this day. Zombieland would probably be my #2, the rules and the comedy aspect of the zombie apocalypse really resonated with me. #3 would be Dawn of the Dead (both of them, yes I’m cheating).

Ah yes, this one never gets old. Considering the room I am in right now has a shelf full of tools right next to me, the choices are plentiful. Also being an avid knife collector and strong supporter of the 2nd Amendment to the Constitution of the United States, let’s just say I will stand better than an average chance of surviving.

You may well survive Jon, you may well… Thank you for answering my questions and please come back when the Dead Air Anthology is released!

Join my next week when I interview Rose Blackthorn!