Today I am joined by Adam Millard, a talented author who also wears the owner and editor hats over at Crowded Quarantine Publications. If this is the first time you’ve heard the name Adam Millard, I’m going to start off by asking – where the heck have you been hiding?? Now that I’ve got that out of the way, here’s a bit more information about him… 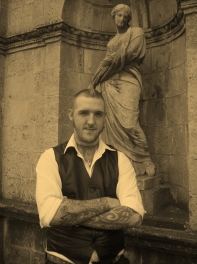 Adam Millard is the author of twelve novels and more than a hundred short stories. His work can be found in collections and anthologies from Evil Jester Press, Angelic Knight Press, May December Publications, Bizarro Press, Sirens Call Publications, and Rymfire Books. Adam can be followed on Twitter @adammillard. For more information, including upcoming appearances and signed copies, go to www.adammillard.co.uk.

Now it’s time for the fun part! Let’s get down to business and ask Adam the age-old question – why Zombies? Is there anything specific that draws you to the genre?

I just find the whole concept fascinating. The methods by which one becomes a zombie can be anything, which is what makes a zombie-apocalypse so unpredictable. It can be anything from an uncontrollable virus to a passing comet. When a bite from a Sumatran rat-monkey can make zombies, you know anything can, and I just love the different scenarios. To me, zombie books and movies aren’t about the hordes of undead; they’re about the survivors, the people who suffer through the event and try to remain uninfected. It’s their story, not the zombies.

I suddenly have the urge to watch Braindead… Speaking of movies, what are your top 3 favourite Zombie films?

The original Dawn Of The Dead is my favourite zombie film of all time, though Zack Snyder’s remake wasn’t too shoddy by remake standards. Shaun Of The Dead is my favourite zom-com, and references a lot of great movies. There have been a lot of imitations, but none that even come close to capturing the originality and cleverness of SOTD. And it would be wrong to say anything other than the original Night Of The Living Dead as my third answer. That was the one that started it all, a piece of cinematic history. Not bad for a movie with a budget of only $115,000.

Funny you should mention Synder’s remake; I actually lived near and used to shop in the mall that they used for filming (before they tore it down). Kinda surreal to walk through it after seeing the movie, it’s amazing how being able to physically put yourself in the setting can make the scenes seem more real. It’s like imagination and books, and how reading can open your mind up to new and wondrous worlds. What are your 5 favourite Zombie books that you didn’t write?

Okay, this is a tough one. I would definitely say the Autumn series by David Moody, and I’m counting that as one of my five. Moody knows how to write zombies, and I urge anyone who hasn’t yet, please read it. World War Z by Max Brooks just for its ingenuity. The way he put that together was superb. J.L. Bourne’s Day By Day Armageddon is also great. David Wellington’s Monster Island, and its subsequent sequels, and finally Night Of The Living Trekkies by Kevin David Anderson and Sam Stall. I just love the idea of a zombie-apocalypse happening at a Star Trek convention. Lots of fun.

I’m a huge fan of Wellington’s Monster series myself, but I have yet to pick up Night of the Living Trekkies– thanks for the recommendation! It’s interesting how each author that writes in the genre puts their own little stamp on what a Zombie means to them. What makes your Zombies different?

My zombies are your standard Romero zombies. They don’t run, or shoot weird appendages from their hands. They’re just dead folk shambling around. I wanted to honour George Romero’s definition of zombies as closely as possible, since these were the ones I grew up knowing and loving. Back then, zombies didn’t sprint at you like Usain Bolt on bath-salts; those were the days. . . .

Those certainly were the days Adam, if I were to come across a Zombie that ran like Usain Bolt, I think I might just give up! There’s absolutely no way I’d be able to outrun it! While I find a lot of the suped-up Zombie films and literature to be entertaining, I like the aspect of believability that you get with certain pieces. Like The Walking Dead. For the most part, in my opinion, it’s so well crafted that it has that air of believability that runs through it. Perhaps that’s why it’s so popular and has driven up the interest in the genre… What do you think? Has the popularity of The Walking Dead and its appearance in mainstream media has helped to increase the popularity of the genre, or has there always been such an interest?

It certainly hasn’t harmed the genre. I love The Walking Dead. It got a lot of people unfamiliar with the genre interested in zombies, which is great for the likes of me. I probably wouldn’t have sold half the books I have if it wasn’t for shows like The Walking Dead. I think, once in a while, a genre gets a kick up the ass. Vampires had it with True-Blood and The Vampire Diaries, ghosts had it with American Horror Story and Zombies have it with The Walking Dead. In a few years time, interest might wane once again, but ultimately the genre will never go away.

The Walking Dead certainly hasn’t hindered any of us that write in the genre. Tell us about your latest project; published or otherwise.

I’ve just finished the first draft on the final book in my Dead series, which is due to be launched at the Sci-Fi Weekender in March 2013. It was one of the saddest books I’ve ever had to write, which might sound stupid being a zombie novel. These characters have put food on my table for two years now, and how do I repay them? Well, you’ll have to wait, but let’s just say the book ties everything up neatly. I had a lot of fun with this one, and I’m looking forward to seeing what my amazing illustrator, Chris Taggart – who’s responsible for all the covers in the series – comes up with.

If you’ve missed any of the Dead series, now is the time to catch up! Here’s a look at the most recent book in the series, Dead Frost. If you’d like to purchase it, clicking on the cover will take you to Amazon, but make sure you read the rest of Adam’s interview first! 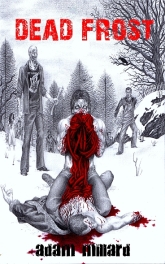 The world ended on October the seventh, 2011. Not with a bang, as some theorists predicted, but with a whimper. There was no fruition of a Mayan prophecy, no alien attack, no terrorist uprising, and no supervolcano eruption. It was a simple virus that finished mankind off; a superflu that couldn’t be cured once it had been contracted. A small group of survivors find themselves struggling to come to terms with the new world around them. Living in a disused army barracks, the group survive in relative safety, only sending scavengers for food and supplies when necessary. Shane Bridge had, until recently, been incarcerated in a maximum-security prison, but now that he is out, and the monotony of day-to-day life has become unbearable, the time has come to abandon the confines of the barracks and begin the search for his family. But death is never far away, and the flesh-eating hordes are the least of Shane’s worries. The Frost has begun…

If the Zombie Apocalypse were to occur right now, 5 things found in the room you are currently sitting will be your weapons – what are they?

I have a vintage typewriter, which has some weight to it but it worked for Paul Sheldon in Misery, so I’d give it a go. Looking round, I’ve realized that all my good weapons are upstairs, which is probably a silly mistake. I have a motorcycle crash-helmet next to my chair; I reckon I could put that on to prevent having my face chewed off, and also headbutt the zombies. I have a pair of scissors – a nice big pair, too, not ones for trimming toenails – a hefty Predator mask, which is hanging on the wall and could do some serious damage of utilized correctly, and a three-tier candelabra, which may or may not be sharp enough to spike the undead with. The room is pretty much baby-proofed due to having a small one running round. If I was upstairs in the armoury, though, the hordes wouldn’t stand a chance.

Well Adam, it sounds like your fairly prepared – let’s just hope you’ve got time to get up the stairs! If you’re interesting in finding out more about Adam or in learning where you can pick up his books, all of that information can be found on his website.

Tune in next week for my interview with Armand Rosamilia…

One thought on “Chewing Braaiiinns with… Adam Millard”